By Emily Brandt and Hannah Brandt

The City of Fresno shares in the long, shameful U.S. history of red-lining. It has been carved up by the building of a series of freeways and the same cycles of urban renewal, neighborhood revitalization and redevelopment as other California cities, such as San Francisco, Oakland and San Diego, as well as Overton, in Miami, Fla. and thousands of cities throughout the United States.

Middle-class residential neighborhoods in California sprang up after World War II as places of opportunity for Black, Indigenous and People of Color (BIPOC) who often worked in the war industries or kept society running like a well-oiled machine stateside. The educational and housing benefits received by white veterans from the GI Bill were almost never available to BIPOC veterans because they were either denied when they applied, didn’t bother to try because they were sure they’d be denied, or the local segregated land covenants and zoning practices disqualified them. That has set back BIPOC families for generations.

Efforts to undo civil rights protections introduced by the Warren Court (Earl Warren was Chief Justice of the Supreme Court from 1953 to 1969) and to weaken government agencies’ ability to maintain those protections have continued to restrict rights that were hard-fought. Access to fair housing and equal education, which go hand in hand, are two of the most difficult to ensure. Like the power of the Voting Rights Act of 1965 has been diminished, the ability to ensure sufficient quantities of good and locally affordable housing through the Fair Housing Act of 1968 (originally enacted to counteract the impacts of redlining and the inequality in the GI Bill) has dramatically dropped.

Since affordable housing is one of the most pressing problems for residents of the City of Fresno, which is openly acknowledged by members of the Fresno City Council and others in local government, it’s worth asking why the decades of promises have borne virtually no fruit for a very large and growing population of the City. Like in all cities in California, the number of residents who are unhoused in Fresno increases almost daily due to a lack of living wage jobs, pervasive poverty and rising economic inequality.

In past evaluations the city has given itself at least a B grade. This is despite very few successful housing rehabilitation completions and the small number of new units built, of which only 10% are legally mandated to be affordable. How that affordability is measured never matches the real market value of the lowest income areas of Fresno or anything residents with the most limited incomes can afford.

New “affordable” housing being built in Southwest Fresno by Self-Help Enterprises, was quoted at a recent Fresno Anti-Displacement Task-Force Meeting (May 15, 2019) as renting for $1200 a month for a two-bedroom apartment. That’s not affordable for people living in Southwest Fresno, the lowest income area of the city, where the market rate for rental housing is far lower than $1200 for a two-bedroom apartment and much lower than the rest of the city. Even in neighborhoods where the rate is much higher than Southwest Fresno, $1200 is high.

Oversight by state or federal agencies of any kind–be they concerned with ensuring our civil rights in general, our access to public schools, or adequate fair housing as HUD is tasked with–is lacking unless residents find sufficient cause to report financial abuses to the Inspector General of the State of California (IG). One local group that succeeded in bringing the City of Fresno to audit by the IG is called Southwest Fresno H.E.A.T. (Hope, Effort, Appropriate and Thriving). The audit found the City of Fresno had used HUD funds inappropriately and issued fines to replace the misused monies.

This pattern exists nationwide as the product of racist housing laws and not by any choices BIPOC buyers made to stay away from predominantly white areas or for lack of Constitutional prohibitions against it. Even with the desegregation of public commerce and public transport, “Ending school segregation was much harder” as was ending housing discrimination; as Richard Rothstein observes in The Color of Law, “shortly after [the Fair Housing Act was defeated in 1966], pressured by national emotion following the assassination of Martin Luther King, Jr., in April 1968, the House of Representatives enacted the law.” Still, there was massive resistance to both.

Since the existing Jim Crow housing covenants and exclusionary and other zoning laws were allowed to live alongside the Fair Housing Act of 1968, there have been two conflicting forces: one demanding desegregation, the other preserving segregation. Busing of school children enables residential segregation to continue because school district lines were not re-drawn to create diverse neighborhoods.

Loan practices continued to operate along the lines of red-lining, which kept Black, Indigenous and People of Color isolated to the segregated neighborhoods they had been for decades. The only exception to this were urban renewal plans in the 1960s and 1970s that allowed for the massive displacement of BIPOC and the destruction of their communities when freeways were put in right through established commercial and residential centers. The effect was to cut these neighborhoods off from the rest of the city and its white residents.

Today, looking at the latest Fresno City Consolidated Plan 2020-2024 (including the Annual Action Plan 2019-2020, and the Impediment to Fair Housing 2020-2024), we still see the strong preference for destabilizing existing neighborhoods like Southwest Fresno where Black, Indigenous and People of Color have been historically segregated. Now it is in favor of gentrification, preparing the area for a new group of residents (primarily white) who will pay higher housing costs, pricing many African Americans and other historically underserved groups out of the area. This is an imitation of cities like San Francisco and New York which have already largely gentrified their historic African American, Latinx and Asian American communities.

The move to reverse urban sprawl in city planning in favor of “Transforming Communities” (replacing the old terms of urban renewal, revitalization, redevelopment, etc.) has increased annexations of the cheapest and most strategically placed land available, building expensive housing there, and forcing the existing residents out. This on the same land to which Black, Indigenous and People of Color were restricted for generations. When African Americans, Latinx Americans, and Asian Americans made Southwest Fresno their own success, it was slashed by freeways 41 and 99, completely excising the economic heart.

This Consolidated Plan–and its component parts, including the Southwest Fresno Specific Plan–do not address the problem of housing for BIPOC and for the poor, in general. Public housing is almost non-existent along the lines of the quantity and housing costs that are feasible for a low-income resident. The federal government, in the form of HUD, exerts no control over what cities do after the approval of the Consolidated Plans (once the plan becomes the Fresno General Plan and the neighborhood-specific plans). 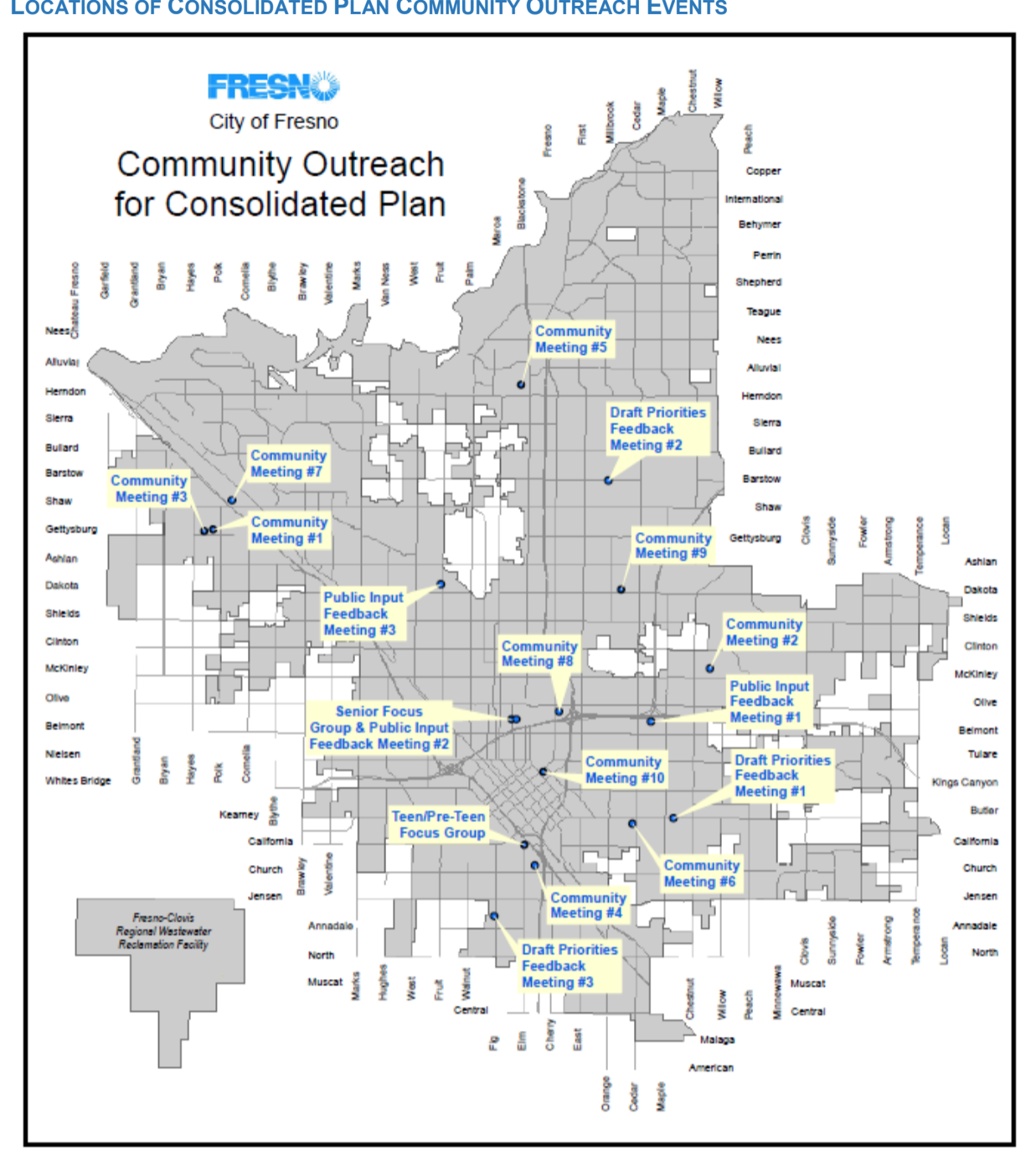 Most residents do not know that this plan is available online and in print for those who cannot access it online. Why don’t they know? Below we have provided charts with details about the community outreach process laid out in the 2020-2024 Fresno Consolidated Plan. Note that in a city of close to 550,000 people only 59 members of the public attended the initial 10 community meetings and a total of 168 people attended any of the meetings, including focus groups and primarily hand-selected interviews.

The City of Fresno Consolidated Plan is vital because it is the part of the city planning process that involves the federal department of Housing and Urban Development (HUD) and it is used to create the City of Fresno General Plan, as well as all the specific neighborhood plans. It is very important for everyone who lives within the City of Fresno. Concerned individuals and organizations succeeded in postponing the final public Consolidated Plan meeting from its original date in March due to the COVIDー19 state/citywide shelter-in-place.

However, Gov. Newsom has signed a series of executive orders that waive aspects of the Bagley-Keene Act and the Brown Act, allowing city and county governments, in addition to other local bodies to hold public meetings virtually as long as there are phone-in options. This has concerned legal observers, journalists and community members throughout the state. Meetings in many jurisdictions are taking place while the public is unaware and expects that shelter-in-place orders have shut local governments down aside from emergency decision-making.

This is also an opportunity for proposals to be slipped into city council and planning commission meetings without the vast majority of the public having any idea. One section of the Impediment to Fair Housing in the 2020-2024 Fresno Consolidated Plan that concerns many is the wide-ranging ability to deny housing as underlined on page 119 in the image below.

Despite the fact that all communications about the meetings have been done solely online during the shelter-in-place, the City of Fresno is holding the final public hearing Consolidated Plan virtually on Wednesday, May 13th, 2020 at 5 PM. Take the time to read the instructions about how to participate in it, as is your right as a resident of the City of Fresno. Below are the instructions to participate in the meeting.